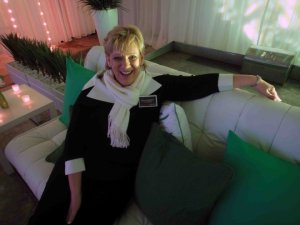 A childhood of violent beatings and victimization, a rape in her twenties, and a murderous attack in her thirties are not what nearly killed Becki Duckworth. It was the destruction of her family that those events triggered.

Becki Duckworth is a mother, wife, and successful event planner. She has raised two sons with her husband, Ronnie: Anthony, age 30, and Lance, age 25. She also has three daughters: Amanda, age 35, Abby, age 29 and Alison, age 27. Amanda lived with her biological father until she was 16 years old. Becki gave up Abby and Alison for adoption at birth; both were open adoption’s. Over the years, they have attempted to bond, unsuccessfully. Abby and Becki re-connected in the fall of 2013.

Becki has produced events for notable public figures such as Secretary of State Hillary Clinton and entrepreneur / philanthropist Phil Knight as well as for world-renowned companies like Nike and Microsoft. She has met three United States Presidents, appeared on The Oprah Show, and rubbed elbows with NBA All-Star players.

Many who see Becki’s glamourous life envy her. But the glamour belies the reality of Becki’s life, past and present.

Becki was born and raised on the outskirts of Chicago, Illinois. Throughout her childhood, she suffered beatings from  her mother almost daily. At the age of 15, she learned that the man raising her was not her biological father. Serendipitously, her biological dad lived only four and a half miles away and willingly offered her refuge from her abusive mother. She ran to him, and he welcomed her with open arms.

In an effort to cover the abuse and protect her reputation in the community, Becki’s mother went to court to regain legal custody of Becki. At the end of a long battle, Becki’s mother was declared an unfit mother by court of law in Kendall County, Illinois, and Becki’s father was granted full custody.

Suffering at the hands of others didn’t end there, though. In 1984, Becki was walking home from a party when she was grabbed by three men and driven to an unknown location,  where she was raped repeatedly. Miraculously, she was able to remember the car’s license plate number, and the men were later arrested and sentenced.

Becki desperately wanted her children to have a life without the daily threat of violence that she’d experienced. She realized that in order to make that happen she had to put as much distance between her family and Illinois as possible. In 1984, she packed up and moved with Anthony. Lance was later born in Portland in 1989.

Unfortunately, Portland turned out to be not quite the safe haven Becki had sought. On the evening of October 21, 1991, she was brutally attacked and stabbed 21 times in the apartment she shared with her sons, 2 and 6 years old at the time. Her boys watched in horror as Becki fought back against her attacker.

After the attack, Becki had two choices: curl up and let life finally do her in, or continue to come at it swinging. She chose the latter.

Little did she know then that love and support such as she’d never known would soon arrive.

In 1993, Ronnie Duckworth moved to Portland to be closer to his family. He and Becki, who had been friends in Chicago, reconnected in Portland. In 1996, they married. Ronnie took in Becki’s sons as his own, shielding them from judgment by their peers lest they find out the boys’ fathers were in prison. Today, Becki and Ronnie’s marriage is still strong.

Twenty-one years after the attack that almost took her life, Becki is still fighting — because, all of her accomplishments aside, the violence that threatened her life so many times still threatens her family every single day. Although the physical wounds turned to scars and faded with time, the emotional wounds have deepened, becoming more raw and septic as each year has passed.

In trying to save her children from the life she had worked so hard to escape, Becki and Ronnie gave them everything: cars, clothes, money, a safe and loving home. But it wasn’t enough. For reasons that can only be speculated, Amanda, Anthony, and Alison have turned against Becki and Ronnie, trying to destroy their reputations, careers, and relationships. Amanda has been out of their lives since 2002, and Anthony and Alison have been in and out for the last several years. The pain from the heartbreak of being estranged from her children far surpasses the pain of any of the brutality Becki has endured in her past.

Becki Duckworth survived a murderous attack and so much more. Her family did not.

This blog is the beginning of a long road to recovery. Through telling her story, Becki hopes to clear all the secrets in her past, taking away their power to hurt her and the ones she loves.

She also hopes that reading her story will help other women to see that no matter what circumstances you come from, not matter what abuse and violence finds you, and no matter what your age, you can have a loving partner, build a successful career, and share a beautiful life with those you love. You can achieve whatever it is you want in life when you come through it swinging.

205 Responses to About Becki Duckworth